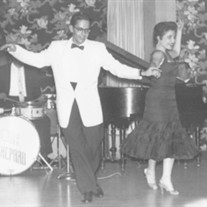 Alan Russell Rubin was a well-known professional ballroom dancer in the 1950's. Alan passed away December 3rd after a brief illness. Winifred, his beloved wife of 54 years, passed away in 2009.

Alan was born in 1930 in Cleveland Heights, Ohio, and graduated from Cleveland Heights High School in 1948. After attending Ohio State University and Case Western Reserve University, he began working at the Cleveland Arthur Murray Dance Studio in Playhouse Square. In 1952, he became the youngest manager of a studio in a major city. Alan and Winnie married in 1955. As Alan and Winnie Russell, they were a well-known dance team and performed at the Bronze, Terrace and Vogue Rooms, The Alhambra Tavern, Lucioni's and the Zephyr Room. In 1960, they moved to Beverly Hills, California, with their two children, Scot and Shawn, where Alan managed the Arthur Murray Studio, returning to Cleveland in 1965. Alan left the dance business in 1970 and became president of Carnegie Insurance Budget Co. and Carnegie Insurance Service Corp. Carnegie was headquartered in Cleveland, but also had offices in Columbus, Ohio; Merrillville, Indiana; Chicago, Illinois; and Orlando, Florida. Alan was a successful business owner and insurance executive for almost 40 years. He retired in 2007.

Alan will be remembered for his devotion to family and friends, his wonderful sense of humor, his ability to tell a great story, his kind and generous nature, his love of animals, especially cats, his culinary skills and passion for restaurants, hotels and travel.

Alan was the dear father of Scot Russell of Bedford, Ohio; Shawn Russell (Mark Belasic) of Bainbridge, Ohio; and Elizabeth Russell Simpler (Ken) of Newark, Delaware. He was the proud grandfather of Blakeley, Gillian and Emmett.

The family suggests that those who wish may make contributions in Alan's name to Geauga Humane Society/Rescue Village, P.O. Box 116, Novelty, OH, 44072.


PDF Printable Version
To order memorial trees or send flowers to the family in memory of Alan Rubin, please visit our flower store.