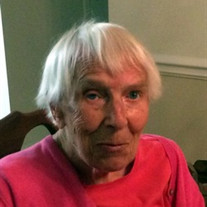 Born in the Netherlands, Ali was the youngest of 9 children; much of her younger years were spent ice sailing, skating and bicycle trekking with her older brothers. As a young woman, she was involved in the Dutch Resistance during WWII. After the war, Ali chose to come to the United States, settling in Cleveland Heights. She met Bob Negus in 1951 and they were married in 1952 at the First Baptist Church of Greater Cleveland. There they joined the 49ers social group, and developed many lifelong friendships.

Bob and Ali raised their family in Cleveland Heights where they enjoyed taking advantage of the wonderful arts and cultural activities available in the Greater Cleveland area. Spending weekends at their cabin on the Grand River and summering at the family camp in the Adirondacks were integral parts of their lives. Seeing them canoeing by has become a cherished memory of many people at the river and lake.

Ali was known as an adventurous spirit, who would try anything. Never a complainer, she would not let physical impairments or illness slow her down. Ali was tenacious and fiercely independent. She will be vividly remembered for the sparkle in her blue eyes, especially when revving-up for a family canoe trip, camping weekend or ---- doing the dishes. A lover of the outdoors, Ali was particularly fond of open vistas. She could often be found enjoying the view with a cup of tea and her knitting while on the deck of the "A" or in the garden.

Volunteering was an important part of Ali's life. Whether leading a Girl Scout troop, chairing PTA meetings, sewing costumes for church theatrical productions, or working weekly with the Cleveland Sight Center, she could always be counted upon to help out when needed. She was also a talented dressmaker, quilter, knitter and avid gardener.

After the death of her husband, Ali chose to move to Judson Park where she enjoyed five years of great friends, new volunteer opportunities, and adventures. She also continued to enjoy the company and shenanigans of her children, grandchildren and great grandchildren.

We all "Go Home." The way home is full of grace and dignity. Ali was often described by those who knew her as a very gracious woman, who aged gracefully. Our lives are full of great memories... as sad as these moments can be for friends and family, know that "Going Home" is natural and very pleasant. Have a wonderful trip home.

In lieu of flowers, contributions may be made in Ali's memory to Hospice of the Western Reserve, 17876 St. Clair Ave., Cleveland, Ohio 44110. A Celebration of Life will be held at Judson Park on Saturday, December 12th from 4 to 6 pm in the Auditorium, Judson Park Chestnut Hills entrance, 1801 Chestnut Hills, Cleveland Heights, Ohio 44106.