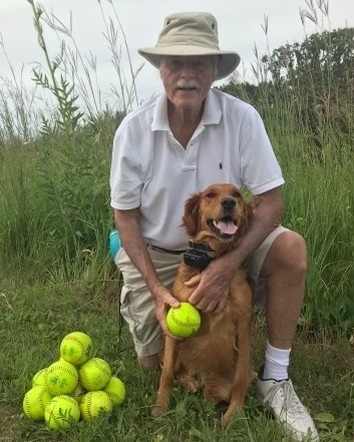 Chuck was born in University Heights, Ohio on October 18, 1944 where he grew up. He received his BBA in Economics from Kent State University and did his graduate studies in business at Marquette University. Chuck’s professional journey in the machine tool and robotics industry began in Cleveland, Ohio. After a two-year apprentice program, Chuck served as a sales engineer in Troy, Michigan before relocating to the Village of Elm Grove in 1973. He subsequently took on sales and executive positions, founded two companies, and made many friends in a career that spanned five decades. Despite his tireless work efforts, he always found time for his family.

Chuck loved spending time with his family - his children and grandchildren were his pride and joy. He loved going on walks with his sweet Maggie and all the dogs that came before her. He was a master at connecting with people, and those who knew him would anxiously await the twinkle in his eye that would foreshadow a great story or joke. He loved hunting in Montana, fishing in Alaska and going for walks on the beaches of Siesta Key, hand-in-hand with Sandi. His daily routine included a midnight snack of graham crackers and milk, and he always loved a good coffee malt.

Chuck also loved and supported his community. He served on the Elm Grove Board of Appeals for over 25 years, including as Chairman, the Planning Commission for 18 years, and the Elm Grove Citizen Police Academy, including as a Board Member and President. He was most proud of his service as an EMS Crew Volunteer and First Responder for nearly 20 years. He loved “being on call” and formed a special bond with all who joined him in that effort. His service and friendship will be dearly missed.

His family is so grateful for the medical staff at Froedert who provided such amazing care. In honor of Chuck, memorial donations may be made to the Elm Grove Police Department or the Humane Animal Welfare Society in Waukesha.

Visitation will be on Wednesday, September 29 from 3-6pm at Becker Ritter Funeral Home in Brookfield, WI. Services will be held at 10am on Thursday, September 30 at Trinity Episcopal Church in Wauwatosa, WI with the Reverend Gary B. Manning officiating. Burial will follow at Wisconsin Memorial Park in Brookfield.

To order memorial trees or send flowers to the family in memory of Charles M. "Chuck" Long, please visit our flower store.